The story behind the Reinheitsgebot

The German purity laws occupies an important place in beer lore, but I have mixed feelings about it. I have long planned to blog about it. What has kept me from doing so, is my lack of understanding of it. It's not the old-fashioned German or for want of available explanations of its meaning and significance. Quite the opposite, there are so many interpretations and explanations that I simply do not know which to believe. Thus, there must be a large number of misconceptions and myths surrounding it, many which are obviously false. In this entry, I will try to separate the truths from the myths. 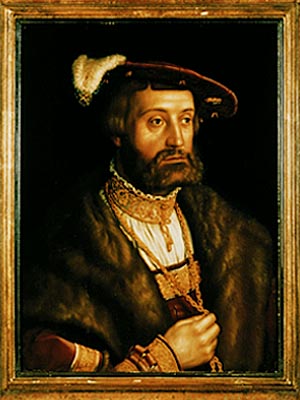 Let us start with the basics. Duke Wilhelm IV of Bavaria signed the German purity law (Reinheitsgebot) on April 23, 1516 in Ingolstadt. The law basically states that (1) the maximum allowed prices for beer; and (2) that beer may only be brewed from barley, hops and water. The text of the Reinheitsgebot is: (taken from the article "History of German Brewing" by Karl J. Eden, published in 'zymurgy' magazine, Vol. 16, No. 4 Special 1993.)

We hereby proclaim and decree, by Authority of our Province, that henceforth in the Duchy of Bavaria, in the country as well as in the cities and marketplaces, the following rules apply to the sale of beer: From Michaelmas to Georgi, the price for one Mass [Bavarian Liter 1,069] or one Kopf [bowl-shaped container for fluids, not quite one Mass], is not to exceed one Pfennig Munich value, and From Georgi to Michaelmas, the Mass shall not be sold for more than two Pfennig of the same value, the Kopf not more than three Heller [Heller usually one-half Pfennig]. If this not be adhered to, the punishment stated below shall be administered. Should any person brew, or otherwise have, other beer than March beer, it is not to be sold any higher than one Pfennig per Mass. Furthermore, we wish to emphasize that in future in all cities, markets and in the country, the only ingredients used for the brewing of beer must be Barley, Hops and Water. Whosoever knowingly disregards or transgresses upon this ordinance, shall be punished by the Court authorities' confiscating such barrels of beer, without fail. Should, however, an innkeeper in the country, city or markets buy two or three pails of beer (containing 60 Mass) and sell it again to the common peasantry, he alone shall be permitted to charge one Heller more for the Mass of the Kopf, than mentioned above. Furthermore, should there arise a scarcity and subsequent price increase of the barley (also considering that the times of harvest differ, due to location), WE, the Bavarian Duchy, shall have the right to order curtailments for the good of all concerned.

This law applied to Bavaria - which was smaller than the Bavaria of today. It was revised several times, and in the course of German unification, it was extended to the whole of Germany in 1906.

As I said, there are a number of misconceptions, myths and maybes. Let us go through them: 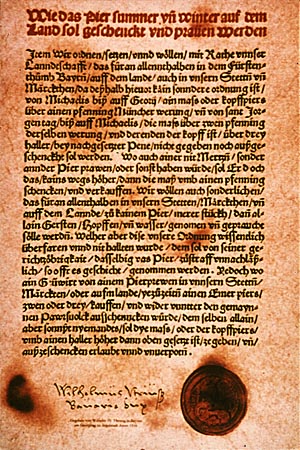 The text of the law.
Internet

The common explanation of the Reinheitsgebot is that it is an piece of consumer protection. I have listed three alternative explanations: a) Regulating the marked for fair competition, b) forced improvement of resource utilization of grains, and c) a piece of witch-hunting directed against the brewing of the alewives using strange adjuncts. Please note that none of these four explanations precludes any of the others. They may all be part of the truth.

But it doesn't sound so snappy ...